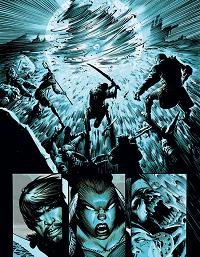 In the beginning The Great came and created children out of the emptiness. The children were gods. As they came of age the Gods set about the creation of the world and the universe around it. It was named Talamh [Táh-lav].

They created the creatures of the lands of Talamh. Many of The Gods, being proud of their own forms, shaped their most prized creations in their own images. Others, being cruel or filled with evil humour or simply jealous of the creations of their more skilled siblings shaped vile things. The more powerful of these monsters were sent out simply to destroy all they came across.

Fierce wars raged across the lands, skies and seas of Talamh.

Warriors clashed in great battles and much glory was to be won. Many races both vile and sublime perished forever. The most noteworthy warriors were the followers of Croga, Cogadh, Fraoch and Éirleach.

This was a time of powerful magic and unbridled skill. A time when no limits were set upon mortal might. From out of the chaos came mighty Sorcerers, with the power to raise mountains, empty seas and twist the universe to their own ends. These were the followers of Draíocht and Éirim but soon the began to forsake their Gods as their own power and pride grew andthey fell prey to the promises of Cealg and Uabhar.

The Gods' chosen ones, the High Priests were blessed with power to thwart even the mightiest of Mages channeling the might of the Gods themselves. They became as puppets, mere conduits of the Gods, driven senseless by the level of magic they endured. The sacrifices made by the High Priests of Feo and Athrú were the most horrifying to behold.

The Masters of the Skill being wise and unbound by their creator Aigne. Sought merely to shield themselves from the chaos that wracked their world. The greatest among them were no less potent than the Mages and Priests who battled endlessly in the Gods 'Great Game'. They hid themselves in a great Mountain Kingdom and bent their will towards knowledge and defense. Their wisdom and knowledge grew as they turned their energy away from war. Aigne was pleased.

The 'Great Game' raged for millennia. Sometimes the wars would give way to a time of slavery or a time of peace when either Chaos and Evil or Law and Good had achieved a temporary supremacy. Always no matter how great a race, an empire or an ideal. The 'Great Game' would erupt into violence again. As the 'Game' progressed the Gods began to restrain the most powerful of the creations as they foresaw the destruction of Talamh if all the creatures the had brought forth be allowed to remain in the game.

Not all the Gods cared for the wisdom of this decision. While they agreed to 'The Binding' in public, they plotted together and against each other in secret. This was to be the time of their greatest advantage. A time to finally 'Win The Great Game'.

The Greatest of the Sorcerers was 'Táin MacLir'. He was a legend through most of The Great Game and was beloved of Draíocht. Through whispers and dreams Cealg and Uabhar brought dark knowledge to Táin MacLir. This dark knowledge promised to make him powerful enough to end the Great Game forever and prevent mortals from being the playthings of the Gods.

Táin MacLir raised a huge army and prepared to crush the forces of Evil forever and then to challenge the Gods' right to abuse the creatures of Talamh. A great battle was to be fought and vast hordes of armies assembled. They had traveled thousands of miles to gather for battle. Some had traveled across the planes. MacLir knew all the Gods were watching.

Before even a drop of blood was spilt, he cast his most potent magic. Cealg Smiled. As he finished his lengthy incantation MacLir knew he had been deceived. He felt the great surge of power he had been promised but not within himself but in the middle of the great battle field. The all of Hell broke loose. MacLir had opened a permanent Chain-Gate to all of the Lower Planes. Within minutes there were Thousands of Tanar'ri, Baatezu, Yugoloths and Slaadi laying waste to the everything in sight.

Feo and Éirleach's power grew with every death and they could see their victory at hand. It was then that the Father of the Dwarves 'Mishneach' [Mish - Knock]. Made the supreme sacrifice. He summoned all of his will, and gathered all of his essence. In defiance of the most sacred law of the Great Ones he forced himself into the Prime Plane and manifested on Talamh.

He was shaking with Tremendous pain as exploded onto the BattleField. The Great Ones had decreed that any God daring to break their laws would suffer a painful draining death, slowly stripped of their power. Towering above the Battle Field Misneach was bolstered by the faith of his Dwarven subjects. He picked up Táin MacLir and hurled him into space. The he smashed the Chain Gate began to crush the demon hordes like insects. Balor, Pit Fiend and Ultraloth were as chaff before the Storm of his Fury. As his power began to wane his granted all on the field the power to Smite the forces of Evil that remained.

As the last of his power was drained by the Great Ones ancient law Misneach bellowed a terrible scream and the Evil Gods in their fury fell upon him using all their remaining pawns. Before the powers of Good could rally and drive them off the body of the Dead God was defiled and spirited away.

While the battle raged on Talamh the Gods too fought, their pawns on Talamh all but forgotten. The Gods' War wracked the Lands of Talamh but was one-sided thankfully brief. Having seen how close they had come to destroying their great creation they decided that the Game must end and the powers of mortals must be limited. The Gods who had almost brought ruin were cast out form the Godshome in shame. A new order was agreed upon. The Wars between Good and Evil and between Law and Chaos were to cease.

Croí, Cogadh and Draíocht forged a new union among the Gods. Croí was to ensure that a harmonious balance was kept between all the various forces, needs, races, beliefs, Gods and mortals of Talamh. Cogadh and Draíocht led factions of Gods that balanced one another. Many Gods were unwilling to join in this new order.

The Fallen were Bound to the Lower Planes, from there they could have only a minor role in the affairs of Talamh.

Many Gods who felt they would imbalance the new order or who had grown weary of all the strife they had caused withdrew voluntarily to the upper planes and agreed to restrict themselves as The Fallen had been restricted.

To commemorate the beginning of the New Order, two Moons were created 'Charon' and 'Shale'. Staring with an eclipse of the sun, by both moons, the new moons began their eternal cycles. The First eclipse and all those that followed are known as 'The Peering Eye' as the dark moon of Shale forms a pupil for the larger luminous Charon.

To ensure that peace could reign:
The Church of The Moons was created.
Magic knowledge was suppressed.
The Skilled Masters were instructed to guide and protect the other mortals.

The Church of the moons prospered and spread gaining huge support now that the Gods were united. Magecraft was shunned as Wizards were persecuted for generations after the Death of Táin MacLir. The Druids, The Seekers and The Masters worked outside the laws of all the Lands of Talamh to ensure that the balance was maintained.

The Dwarves turned to The Church of The Moons after the death of Misneach and after many generations he was revered more as a legend than as a Deity. Many Dwarven cities were destroyed or deserted in the despair and chaos after the Great Battle and so most of the temples and statues of Misneach also perished.