This spell grants a willing creature you touch the ability to breathe underwater until the spell ends. Affected creature also retains their normal mode of respiration. The target also gains a swim speed equal to their walking speed. Being underwater imposes no penalties on the target's movement or attacks.

The effects of the Water Adaptation spell are also applied to the target's equipment.

You hurl a Dagger at a creature or object within range. Make a ranged spell attack against the target. On a hit, the target takes 2d4 piercing damage. The dagger then returns to your hand. You add your spellcasting ability modifier to the damage. Any other properties of the dagger attack apply as normal

LEVEL Cantrip
CASTING TIME 1 Action
RANGE/AREA 60 ft
COMPONENTS V, S (the darkness behind your eyes)
DURATION 10 Minutes
SCHOOL Illusion
ATTACK/SAVE INT Save
DAMAGE/EFFECT  Psychic
You draw a smoking orb of darkest moonlight from your eyes into your outstretched hand.
The orb sucks in light within 15 feet of you to and you are lightly obscured. You may hold the orb for 10 minutes.
When you cast the spell or as an action in any round before it ends you can hurl the orb at a creature and attempt to shift its perception and warp its position in space and time.
Choose one creature within range. The target must make an Intelligence saving throw. On a success the orb has no effect.
On failure, the target enters an illusory dimension created by your mind. As they struggle to escape, they take 1d4 psychic damage and they use 10 feet of their movement from their next turn. You choose the movement mode and movement direction.
This spell’s damage increases by 1d4 when you reach 5th level (2d4), 11th level (3d4), and 17th level (4d4).
Spell Tags: CONTROL MOVEMENT
Available For: CLERIC SORCERER WARLOCK WIZARD ARCANE TRICKSTER
https://www.dndbeyond.com/spells/660425-dark-orb

You use this spell to charge a Draíocht Ring. The ritual transmogrifies your life energy and molten silver into Draíocht Ring charges. This ritual is an arcane spell, a religious service to Draíocht and a Test of Faith. To cast this it you must be free to give worship to Draíocht, be attuned to a Draíocht Ring, posses a Tine Bowl and a silver piece.

As part of casting the spell you place silver into the Tine Bowl. The bowl is immediately engulfed in flames and melts the silver in moments. You can spend one Hit Die per silver piece to infuse the molten silver with energy. For each Hit Dice spent, roll 1d10 + your spell casting ability modifier to create charges ready to be added to the Draíocht Ring.

As the ritual is drawing to a close you perform the Test of Faith. You place your index finger into the molten silver. If Draíocht’s is pleased, the ring will absorb the energised silver and protect you from harm. The charges are added to The Draíocht Ring. The remaining silver can be shaped into any form you desire before it cools.

If Draíocht is not pleased, you howl in agony as your finger is burnt away. The silver forms into a jagged smouldering claw fused to the ring. This is a divine curse and can not be prevented in any way. While cursed you have disadvantage on Strength and Dexterity ability checks requiring the use of a hand as well as on spell attack rolls. Saving throws against your magic have advantage. You remain attuned to the Draíocht Ring but you can not use it.

You summon a splinter of your intellect and forge it into a weapon of pure force. One target of your choice within range takes 1d4 force damage. You may choose to make a ranged spell attack to hit the target, if you hit the target, it takes double damage.

You shine a dark beam of Shale’s moonlight at your enemies shifting it’s perception and position in time and space. Choose one creature within range. A target must succeed on a Intelligence saving throw or take 1d8 psychic damage and be moved 10 feet in a direction you choose as it fails to comprehend the mysteries of Shale.

Your fingertip is temporarily replaced by a tiny silver falcon. It flies at a target at blinding speed before disappearing. You make a ranged spell attack against the target. If the falcon hits it does 1d8 + your spellcasting ability modifier piercing damage. The spell’s range is 150 feet but you may attempt to hit targets up to 750 feet away but these attacks are made with disadvantage.

You can cast this cantrip with greater effect at higher levels. You can use two charges at 5th level, three at 11th level and four at 17th level. You make a separate ranged spell attack for each charge.

You conjure a magical giant falcon of pure silver, that slashes at a creature that has provoked an opportunity attack. The falcon makes a melee spell attack against that creature using your game statistics. On a hit, the target takes 1d8 slashing damage per two charges expended. You may add your spellcasting ability modifier to the damage. The damage counts as magical and silver. If the attack roll is a natural 19 or 20 then the attack is a critical hit.

The target and any equipment they are carrying will not be damaged by immersion in water. This does not protect from damage caused by side effects of immersion such as currents, pressure or temperature etc and does not prevent damage from other items in the water such as pigments, salt, sharks or Sahuagin.

This spell is usually performed as a ritual. It is often used to prevent damage to the property of worshippers entering an Uisce templeWealthy nobles will often pay Uisce Priests to perform this ritual before embarking on a sea voyage.

You can control the electrum chisel, that is the material component for this spell using your intellect. If you are proficient in Intelligence (Arcana) you can use this skill to make ability checks to create sculptures instead of making ability checks with artisan's tools.

The effects are similar to the mage hand spell, but only the chisel can be affected, it can apply considerable pressure to sculpted materials. The effective Strength score of the chisel is equal to your Intelligence (Arcana) modifier +10.

Sculpting using this spell is extremely fast. The one hour duration allows the creation of a medium sized sculpture from mundane materials, such as wood or stone. The quality and accuracy of the final sculpture is determined by your Intelligence (Arcana) check. If you spend a healing surge you gain a +5 bonus on this ability check.

You can also use a kellum chisel as the focus for this spell which provides +5 additional bonus to the final check. When using a kellum chisel, any substance can be sculpted.

The chisel can be used to make ranged spell attacks against constructs. Its base damage is 1d4 magical piercing. You use your Intelligence (Arcana) score to determine your attack and damage modifiers.

You create a permanent arcane effect that conjures and binds a fragment of non-sentient energy into a container. Energy types that can be included are: acid, cold, fire, force, lightning, necrotic, poison, radiant, thunder. The bound energy dances hypnotically within the container.

If you spend a healing surge while concentrating on this effect it becomes the effect becomes permanent. This spell is most often cast as a ritual as part of the creation of magic items. 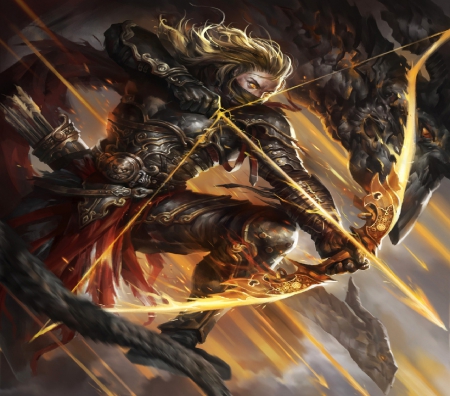 The wood of a bow you are holding is imbued with the sun's power. For the duration, you can use your spellcasting ability instead of Dexterity for the attack and damage rolls of ranged attacks using that weapon, and the weapon's damage die becomes a d8. The weapon also becomes magical, if it isn't already. Arrows fired from the weapon deal either piercing or radiant damage. The spell ends if you cast it again or if you let go of the weapon. The bow and any loosed arrows shed dim light in a 10 foot radius. Arrow light fades after one turn.

You attempt to charm a pair of humanoids you can see within range. As part of the action used to cast this spell you whisper to your bow and fire two arrows, one at each target. You make a ranged attack roll with advantage to hit each target and the arrows become invisible and deal no damage. Each target that is hit must make a Wisdom saving throw, and does so with advantage if they see you make the attack. They does so with disadvantage if they are already attracted to the other target. If they fail the saving throw, they are charmed by you until the next sunrise or until the other target does anything harmful to them.

While charmed in this way each victim will be desperately and hopelessly in love with the other and will do anything for them. Physical expression of their love is almost guaranteed.

They cannot resist the urge to talk about their love. Each will tell you anything you wish to know about the other. If you ask them to divulge secrets they would normally never tell, they are allowed a second save to resist the effects, but only after the question is answered. If they succeed, they will immediately know what has happened. If they fail, they will answer further questions, with renewed enthusiasm.

This effect lasts until sunrise at which point they will both assume that their unanticipated ardour has simply waned suddenly. In many cases the effect will last long after the spell, as the natural effects of love persist. If they are subsequently shown evidence that they were subject to divine guidance they will believe it, but their reaction is unforeseeable. Such is the fickleness of love.

Casting this spell does not end an invisibility effect. This spell is also known as The Kamadeva Whisper.

At Higher Levels. When you cast this spell using a spell slot of 2nd level or higher, you can target one additional creature for each slot level above 1st. The creatures must be within 300 feet of each other when you target them.

You blast a jet of water with the power of a dragon.

Make a ranged spell attack against a target object or creature. On a hit the target takes 1d8 bludgeoning damage and is moved 10 feet away from you.

If you cast this spell while underwater you can also move yourself 10 feet away from the target.

If you dash while swimming, you cast this spell with no target, as a bonus action, to increase your swim speed by 10 feet.

If you move to the surface of a body of water, you cast this spell with no target, as a bonus action to can blast yourself 10 feet into the air.