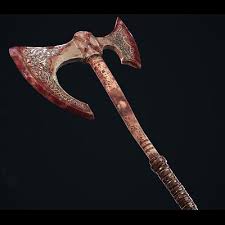 Weapon (greataxe), very rare (requires attunement by a a mortal that has been slain by a foe and returned to claim victory)

This greataxe is stained with the blood of countless enemies killed in arena battles. It travelled with a gladiator turned freedom fighter who fought the fiends of the hells, hades and the abyss in order to save his people.

Through strange magics and battles in arcane locations it has been forged, growing from a simple gladiator's weapon to a scourge of all beings that threaten the mortal world. When you hit a fiend with it, the fiend takes an extra 2d8 radiant damage.

The blood infused metal blade of this weapon has the properties of a silvered, adamantine, cold iron blade. The slashing damage from this weapon ignores both resistance and immunity.

After defeating an Ozyluth in legendary single combat, the blade claimed the fiend's power to create poison. When you hit a creature with it, the creature must make a DC12 Constitution saving throw or take 3d6 poison damage.

You gain a +1 bonus to attack and damage rolls made with this magic weapon.

Proficiency with a greataxe allows you to add your proficiency bonus to the attack roll for any attack you make with it.