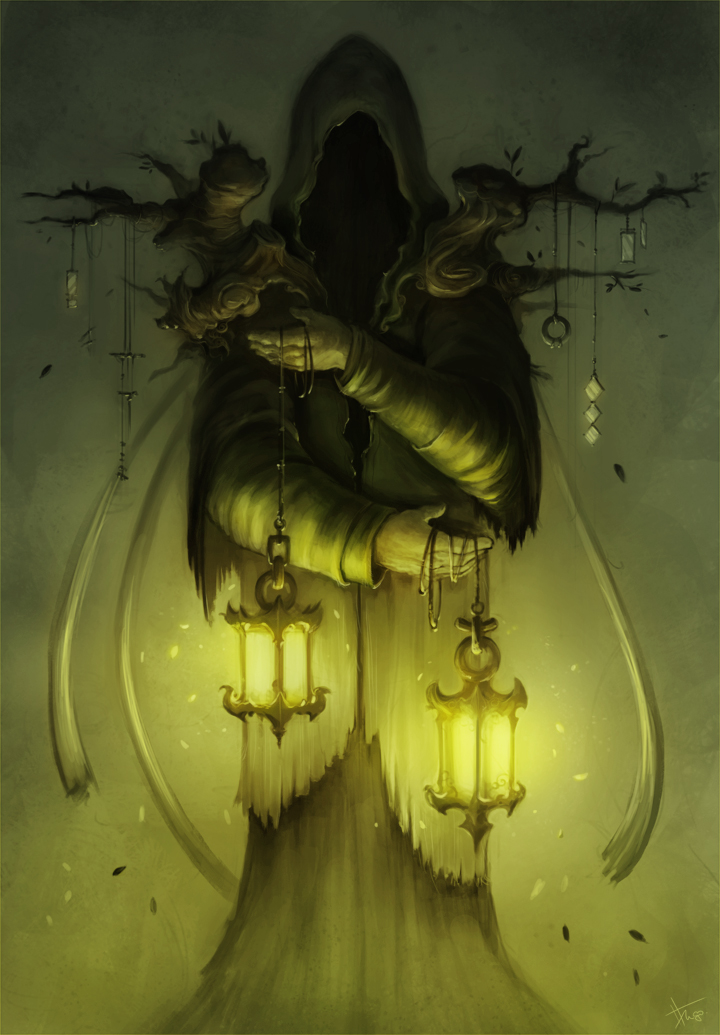 The Gatekeeper
Soultaker
The Harvester
The Inevitable
Death

If The Cycles are to continue, then mortals must die and souls must start the next part of their journey. Croi has entrusted the crucial task of overseeing The Cycle of Life and Death to Bas. Bas receives the souls of all mortals and judges them. He then places them in the wall of souls. After a time of His choosing, based on criteria known only to Him, the souls are sent from the wall of souls to their ultimate fate. While His role is crucial, even the other Gods are unnerved by His presence. Only Croi appreciates His company.

Death is a gift.
All mortal lives contain pain and suffering. When a mortal’s body is no longer capable of housing it’s soul, Bas sheppards the soul to the next stage of it’s existence. To live forever is a curse. The be trapped in a pain filled body is a curse. Bas sets souls free.

Death is not the end,
A mortal’s body dies, but it’s soul continues on.

Bas is Merciful
If a mortal dies before his time, his soul may be recalled to the mortal realm, if Bas feels that the return is just. Not all souls can be returned from Bas’ care, there must be a sacrifice made by those requesting the return of a soul

Death cannot be cheated.
While the death of a mortal can be delayed. It’s soul must ultimately be released to the wall of souls. If this doesn’t happen The Cycle of Life and Death is unbalanced. This is potentially catastrophic. Those who try to cheat Death by extending the duration of their stay I the mortal realm anger Bas and must be dealt with. This includes, Undead, practitioners of soul stealing magic and any mortals who extend their lives unnaturally.

While the majority of the priests of Bas are mortals who are happy to meet their new state at the end of their lives, other seek to delay their demise. Bas understands this desire, and grants eternal vigour to those unwilling to die. Many outside The Cult of Bas do not see the difference between his ‘Deathless’ priests and the undead they hunt. The distinction is one of choice and control. Bas chooses who may extend their lives and who may not. To prevent his choice is Blasphemy of the worst kind and will be dealt with by his followers.

Bas priests perform all the death rituals and burials of most mortal races.

Bas priests also entertain entreaties to prematurely end the lives of certain mortals for a price. His priests analyse the requests, in light of their impact on The Cycle of Life and Death, and they will then ask for a price in return for their service. The price is rarely merely monetary. The Inquisition and Stiuradh often have very interesting and odd payments in mind. Once an ‘expedited demise’, as an assassination by a priest of Bas is called, has been sanctioned, the priests attempt to carry it out as quickly and quietly as possible.

Temples of Bas are usually found in the middle of graveyards, and resemble great mausoleums. The control over life and death within the grounds of a Bas Temple is absolute. The dead rest peacefully in their graves – unless Bas needs them.

Other Bas Temples are more secretly placed and resemble mercantile places of business. The decorations are often dark and macabre in these places, which are dedicated to the training and practice of assassinations.

Bas priests are somber and fatalistic, which is to be expected given their focus on death, and their constant dealings which the plane of shadow and the wall of souls.