A dretch is about 4 feet tall and weighs about 60 pounds. Dretches cannot speak but can communicate telepathically.
Combat
Dretches are slow, stupid, and not very effective combatants. In one-on-one combat, they rely on their damage reduction to keep them alive. In groups, they depend on sheer numbers to overcome foes and immediately summon other dretches to improve the odds in battle. They flee at the first sign of adversity unless more powerful demons are present to intimidate them into fighting. Dretches’ fear of their greater kin is stronger then even their fear of death. A dretch’s natural weapons, as well as any weapons it wields, are treated as fallen for the purpose of overcoming damage reduction.
Spell-Like Abilities: 1/day—scare (DC 12), stinking cloud (DC 13). Caster level 2nd. The save DCs are Charisma-based.
Summon Demon (Sp): Once per day a dretch can attempt to summon another dretch DC 14. This ability is the equivalent of a 1st-level spell.
Telepathy (Su): Dretches can communicate telepathically with creatures within 100 feet that speak Abyssal.

All targeted creatures of less than 6 HD become frightened. If the subjects succeed on a Will save, they shaken for 1 round. Creatures with 6 or more Hit Dice are immune to this effect. Material Component: A bit of bone from an undead skeleton, zombie, ghoul, ghast, or mummy. Cause fear counters and dispels remove fear.

Stinking Cloud
Conjuration (Creation)
Level: Sor/Wiz 3
Components: V, S, M
Casting Time: 1 standard action
Range: Medium (120 ft)
Effect: Cloud spreads in 20-ft. radius, 20 ft. high
Duration: 2 rounds (plus 2-5 rounds)
Saving Throw: Fortitude negates; see text
Spell Resistance: No
Stinking cloud creates a bank of fog like that created by fog cloud, except that the vapours are nauseating. Living creatures in the cloud become nauseated. This condition lasts as long as the creature is in the cloud and for 1d4+1 rounds after it leaves. (Roll separately for each nauseated character.) Any creature that succeeds on its save but remains in the cloud must continue to save each round on your turn. Stinking cloud can be made permanent with a permanency spell. A permanent stinking cloud dispersed by wind reforms in 10 minutes. Material Component: A rotten egg or several skunk cabbage leaves.

Shaken: A shaken character takes a –2 penalty on attack rolls, saving throws, skill checks, and ability checks. Shaken is a less severe state of fear than frightened or panicked.
Frightened: A frightened creature takes a –2 penalty on all attack rolls, saving throws, skill checks, and ability checks and in addition they flee from the source of their fear as quickly as they can. They can choose the path of their flight. Other than that stipulation, once they are out of sight (or hearing) of the source of their fear, they can act as they want. However, if the duration of their fear continues, characters can be forced to flee once more if the source of their fear presents itself again. Characters unable to flee can fight (though they are still shaken). A frightened creature can use special abilities, including spells, to flee; indeed, the creature must use such means if they are the only way to escape.
Nauseated: Experiencing stomach distress. Nauseated creatures are unable to attack, cast spells, concentrate on spells, or do anything else requiring attention. The only action such a character can take is a single move action per turn.

Ascetic.  The giant does not need breathe, drink or eat.

Mind Javelin. The giant coalesces its psychic power into a javelin-like form and hurls it at a creature it can see within 600 feet of it. The javelin is considered a magic weapon and deals 19 (3d6 + 9) psychic piercing damage to the target, striking unerringly. The javelin disappears after it hits.

Mental Nudge. The giant targets a creature it can see within 60 feet of it and creates a psychic punch. The target must succeed on a DC 18 Charisma saving throw or be pushed up to 20 feet in any horizontal direction the giant chooses.

Psychic bolt (2 Actions). The giant hurls a bolt of psychic energy at a creature it can see within 600 feet of it. The target must make a DC 18 Intelligence saving throw, taking 22 (4d10) psychic damage on a failed save, or half as much damage on a successful one.

Discorporation (3 Actions). The giant vanishes, dispersing itself into thin air. The giant can end this effect at the start of any of its turns, becoming a giant once more and appearing in any location it chooses within its lair. While dispersed, the giant can’t take any actions other than lair actions, and it can’t be targeted by attacks, spells, or other effects. The giant can’t use this ability outside its lair.

An enlightened frost giant lives in the very highest of frozen mountain peaks. There they build beautiful sculpted buildings to rival the greatest works of elves, dragons or men.

An enlightened frost giant  can use lair actions in giant form and while discorporated. On initiative count 20 (losing initiative ties), the giant can take a lair action to cause one of the following effects; the giant can’t use the same effect two rounds in a row:

The giant creates a psychic blast centered on a point anywhere in its lair. Each creature within 20 feet of that point must succeed on a DC 18 Wisdom saving throw or be stunned until the end of its next turn.

The giant creates a 20-foot-radius sphere of fog (or murky water within water) centered on a point anywhere in its lair. The sphere spreads around corners, and its area is heavily obscured. The fog lasts until the giant disperses it (no action required), and it can’t be dispersed by wind.

The giant creates a 60-foot-long, 10-foot-wide line of psychic wind (or strong current within water) originating from a point anywhere in its lair. Each creature in that line must succeed on a DC 18 Strength saving throw or be pushed 15 feet in the direction the wind is blowing. The gust disperses gas or vapor, and it extinguishes candles, torches, and similar unprotected flames in its area. Protected flames, such as those of lanterns, have a 50 percent chance of being extinguished.

The region containing an enlightened frost giant's lair is warped by the giant’s presence, which creates one or more of the following effects:

The air is exceptionally still and it is eerily quiet. Faint beautiful music can be almost heard.

A thin rime of frost coats everything and a gentle hush of light snowflakes fall constantly. Moving at more than half speed requires a DC 10 Dexterity check.

Strange aquamarine symbols appear in the sky, seemingly at random. Travelers are beset by visions of the past and future. Secrets and lies are often revealed.

If the giant dies, the symbols and visions end immediately. The frost and snow abate gradually within 1d8 days and natural conditions re-assert themselves. 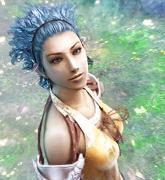 A triton has silvery skin that fades into silver-blue scales on the lower half of its body. A triton’s hair is deep blue or blue-green.
A triton is about the same size and weight as a human. This Druid speaks Common, Druidic, Sylvan and Aquan.

COMBAT
The reclusive tritons prefer to avoid combat, but they fiercely defend their homes. They attack with either melee or ranged weapons as the circumstances warrant. When encountered outside their lair, they are 90% likely to be mounted on friendly sea creatures such as porpoises.

Elemental Affinity: Water Elemental creatures and aquatic creatures count as animals for many druidic abilities.
Elemental Bond: Can choose a Large water elemental as a companion at 7th level and can summon one at 7th Level.

Skills: A triton has a +8 racial bonus on any Swim check to perform some special action or avoid a hazard. It can always choose to take 10 on a Swim check, even if distracted or endangered. It can use the run action while swimming, provided it swims in a straight line.

Nature Sense (Ex): A druid gains a +2 bonus on Knowledge (nature) and Survival checks.
Wild Empathy (Ex): A druid can improve the attitude of an animal. This ability functions just like a Diplomacy check made to improve the attitude of a person. The druid rolls 1d20 and adds her druid level and her Charisma modifier to determine the wild empathy check result.
The typical domestic animal has a starting attitude of indifferent, while wild animals are usually unfriendly.
To use wild empathy, the druid and the animal must be able to study each other, which means that they must be within 30 feet of one another under normal conditions. Generally, influencing an animal in this way takes 1 minute but, as with influencing people, it might take more or less time.
A druid can also use this ability to influence a magical beast with an Intelligence score of 1 or 2, but she takes a –4 penalty on the check.
Woodland Stride (Ex): Starting at 2nd level, a druid may move through any sort of undergrowth (such as natural thorns, briars, overgrown areas, and similar terrain) at her normal speed and without taking damage or suffering any other impairment. However, thorns, briars, and overgrown areas that have been magically manipulated to impede motion still affect her.
Trackless Step (Ex): Starting at 3rd level, a druid leaves no trail in natural surroundings and cannot be tracked. She may choose to leave a trail if so desired.
Resist Nature’s Lure (Ex): Starting at 4th level, a druid gains a +4 bonus on saving throws against the spell-like abilities of fey.
Wild Shape (Su): At 5th level, a druid gains the ability to turn herself into any Small or Medium animal and back again once per day. Her options for new forms include all creatures with the animal type. This ability functions like the polymorph spell, except as noted here. The effect lasts for 1 hour per druid level, or until she changes back. Changing form (to animal or back) is a standard action and doesn’t provoke an attack of opportunity.
The form chosen must be that of an animal the druid is familiar with.
A druid loses her ability to speak while in animal form because she is limited to the sounds that a normal, untrained animal can make, but she can communicate normally with other animals of the same general grouping as her new form. (The normal sound a wild parrot makes is a squawk, so changing to this form does not permit speech.)

Trident of The Deep is similar to Shillelagh. Trident must be wielded two handed.