In Vec Cove, even the quick witted can fall prey to the lauging intrigues of the harlequins dream.
And now the laughing voice echoes from the sewers beneath the town.

Mayor Hepburn Barra is at his wits end and is desperately seeking help from adventurers. The town guard of Vec Cove are under pressure, manpower is dangerously low due to losses to the pirates. Some have died in naval clashes and yet others have joined forces with them, in return for booty.

As if that weren't enough, a gang of thieves calling themselves 'The Scarred Shadows' have started to encroach upon the thieves guild's operations. The Rainbow Coalition, as the guild is known, have had little success as yet, in dealing with the elusive new arrivals.

The Mayor suspects that the trouble with the sewers is somehow connected. 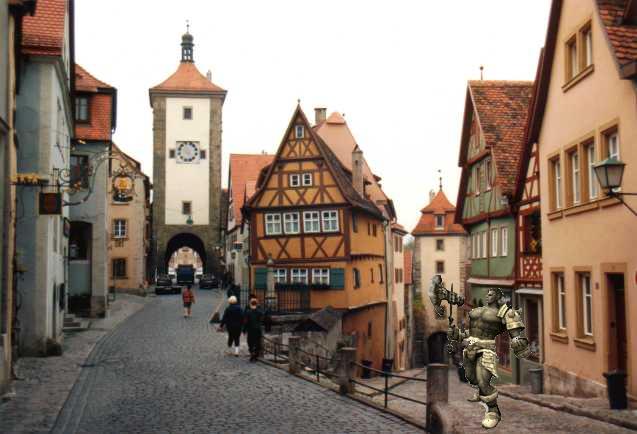 Featherfall Flophouse
Cheap and not very cheerful.
A safe enough stop over for weary travellers looking for very low budget accomodation.
A superior alternative to sleeping under the sky.
Rooms for small groups are available.

Ezechial hails from Bigany City, and studied at the famous Fochlachan Bardic Colleges there. He is a worshipper of Fileadh and a wielder of The Song. Having completed his basic training Ezechial has set out into the world seeking to hone his skills and find inspiration for his compositions in the real world.

This fearsome fighter is the companion and protector of Ezechial Torc a Bigany Bard.

They met and became adventuring partners in Gore's homeland of Stormwatch, when Ezechial travelled and hunted with the Blackfist tribe.

He has many connections in the houses of the Vec familly of Bigany. He has a reputation for getting things done. A reputation that is well deserved and not unrelated to his dark secret. 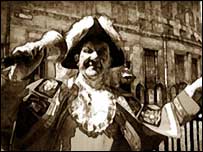 The Mayor of Vec Cove, a generous man to his friends. Courteous and charming when he wishes to be.

Hepburn has big plans for Vec Cove and he is looking for the right people to help him make his vision for the town a reality.

Tercio is the unimaginative name that his parents gave to their 3rd born child.
Tercio grew up in Lakeport as a child of a family where it was all about strength: His father and his two elder brothers are active in the cult of Neart but his relative lack of strength meant that he had to adopt different tactics in responding to disagreements.
He soon took to following some of the swashbucklers and learned from them how to use speed instead of pure strength.
Of course, that didnt earn him much respect in the family business (which mostly involved being paid to look strong) and it was not long before he left Lakeport in search of adventure.
His first job in his new life took him from Lakeport to Redbrick bridge and back again - for which he was paid with the battered scimitar that he currently uses and brief instruction in how to use it.
For his next job he signed on as a caravan guard for a totally boring journey from Lakeport to the far side of the lake where he was kicked out for constantly complaining about lack of bandits "bad luck Gypsum" was how he was called byt the merchant.
Now, he is stranded a long way from home and fast running out of money.
He needs a job, any job....