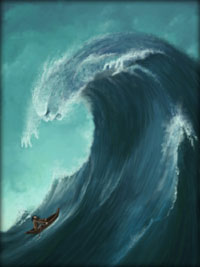 A water elemental can’t venture more than 180 feet from the body of water from which it was conjured.
Water elementals speak Aquan but rarely choose to do so.
Combat
A water elemental prefers to fight in a large body of water where it can disappear beneath the waves and suddenly swell up behind its opponents.
Water Mastery (Ex): A water elemental gains a +1 bonus on attack and damage rolls if both it and its opponent are touching water. If the opponent or the elemental is touching the ground, the elemental takes a –4 penalty on attack and damage rolls. (These modifiers are not included in the statistics block.)
A water elemental can be a serious threat to a ship that crosses its path. An elemental can easily overturn small craft (5 feet of length per Hit Die of the elemental) and stop larger vessels (10 feet long per HD). Even large ships (20 feet long per HD) can be slowed to half speed.
Drench (Ex): The elemental’s touch puts out torches, campfires, exposed lanterns, and other open flames of nonmagical origin if these are of Large size or smaller. The creature can dispel magical fire it touches as dispel magic (caster level equals elemental’s HD).
Vortex (Su): The elemental can transform itself into a whirlpool once every 10 minutes, provided it is underwater, and remain in that form for up to 1 round for every 2 HD it has. In vortex form, the elemental can move through the water or along the bottom at its swim speed. The vortex is 5 feet wide at the base, up to 30 feet wide at the top, and 10 feet or more tall, depending on the elemental’s size. The elemental controls the exact height, but it must be at least 10 feet.
The elemental’s movement while in vortex form does not provoke attacks of opportunity, even if the elemental enters the space another creature occupies. Another creature might be caught in the vortex if it touches or enters the vortex, or if the elemental moves into or through the creature’s space.
Creatures one or more size categories smaller than the elemental might take damage when caught in the vortex (see the table below for details) and may be swept up by it. An affected creature must succeed on a Reflex save when it comes into contact with the vortex or take the indicated damage. It must also succeed on a second Reflex save or be picked up bodily and held suspended in the powerful currents, automatically taking damage each round. An affected creature is allowed a Reflex save each round to escape the vortex. The creature still takes damage, but can leave if the save is successful. The DC for saves against the vortex’s effects varies with the elemental’s size. The save DC is Strength-based.
Creatures trapped in the vortex cannot move except to go where the elemental carries them or to escape the whirlwind. Creatures caught in the whirlwind can otherwise act normally, but must make a Concentration check (DC 10 + spell level) to cast a spell. Creatures caught in the whirlwind take a –4 penalty to Dexterity and a –2 penalty on attack rolls. The elemental can have only as many creatures trapped inside the vortex at one time as will fit inside the vortex’s volume.
The elemental can eject any carried creatures whenever it wishes, depositing them wherever the vortex happens to be. A summoned elemental always ejects trapped creatures before returning to its home plane.
If the vortex’s base touches the bottom, it creates a swirling cloud of debris. This cloud is centered on the elemental and has a diameter equal to half the vortex’s height. The cloud obscures all vision, including darkvision, beyond 5 feet. Creatures 5 feet away have concealment, while those farther away have total concealment.
Those caught in the cloud must make a Concentration check (DC 15 + spell level) to cast a spell.
An elemental in vortex form cannot make slam attacks and does not threaten the area around it.
Skills: A water elemental has a +8 racial bonus on any Swim check to perform some special action or avoid a hazard. It can always choose to take 10 on a Swim check, even if distracted or endangered. It can use the run action while swimming, provided it swims in a straight line.