An enigma. Little or nothing is known of the thief taker general. He runs the city with a velvet-clad gauntlet of steel. He tolerates the thieves but only so as to control them. Where he lives, who he is or any other details about him are lost. People who find them tend to forget them shortly after a period of detention.
Cayman is a stern, efficient and professional man. He reputedly knows of everything that happens at the port. He doesn't know the details of the thieves' guild activities but he accepts that a certain level of crime will happen. He prefers to know what's going on rather than to try to stamp it out "Better the devil you know..." Cayman has been known to take a keen interest when any extraordinary criminal activity occurs. The King knows and approves of this 'crime limitation method'. Cayman regularly reports to the king and is trusted.
Twelve Years ago, Cayman served in the army as a mid level, non-commissioned officer (Corporal). During an expedition to the fledgling mining community in Ice Dale, Cayman discovered that several men in his squad, including his sergeant, were on the thieves' guild payroll. The mining haul was the object of routine skimming made possible by these guards. Cayman was able to orchestrate a sting that caught the guards red handed. In the mayhem that ensued during the raid, the sergeant was killed. Of the four other guards, one was mortally wounded, two were captured and later hanged and the fourth evaded capture and fled into the mountains. Two thieves were arrested and imprisoned for five years. It may be that these two thieves are one of the sources of Cayman's uncanny knowledge of illegal activities within the city.
The escaped guard Gerritt, is once again in Bigany. He was able to get by on the guards' store of stolen wealth and has returned as a merchant, trying to arrange the assassination. Cayman was attacked by some seriously novice assassins. He was lured into an alley by a fleeing cutpurse. He easily fended off the orchestrated attacked and realises that he was set up.
He is now investigating who sponsored the attack. The contract on Cayman Redman can be sought, by inquiring into the rumour in a tavern in the Merchants quarter. Gerritt and his friend and ally Wilhelm will overhear the inquiries and track down whoever is interested.
A couple of weeks after the first attempt, the PCs will be made aware of a hunt for Martel. He has accepted the contract. The party can follow Gerritt, Wilhelm of Cayman to stay on top of this, or they can take the contract. 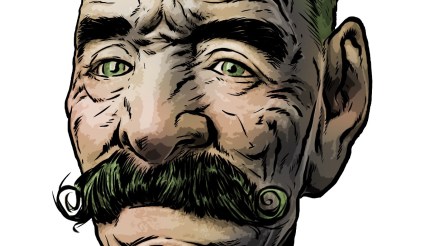 Male Human Rogue 10
Kurgan is a relatively recent arrival on the scene. He moved in from Northern Bigany with a hard core of bruisers in the aftermath of the Sagacious man's departure. He negotiated a section of turf in a series of incidents over a several week period.
Since then he has come to dominate his part of town. A vulnerability of his was identified when he allowed a niece of his to visit from out of town. As part of some plot by a rival gang based in the area now known as Highvale his niece was 'rescued' starting a war between several factions of thieves that erupted into open bloodshed at the marketplace.
In the aftermath he has sent his niece out of town and consolidated his power.

See also Inns of Bigany - The Blade
Human Male Rogue 6, Bard 2
Simon is a medium level member of the thieves' guild. He recently formed a small cell that Evades taxes by selling whiskey that 'fell off the back of a barge' over the counter at the Blade. This is sold as a new blend of Torland Whiskey targeted at people with modest means, he has been fortunate enough to become the sole distributor for this product.
Simon is more greedy that evil. He is a very tolerant man and allows practically any non-damaging behaviour in his tavern in the name of good business (no matter how irritating the visiting country folk are). All are welcome at The Blade.
The 'Mary Belle' calls to Bigany once an Eye. Her owner Capt. Martinez has a deal in expensive Blegian Whiskey with Simon Blade. When the ship calls to port. Blade pays 2000gp to Martinez and then the ship leaves... A day or two later Simon sells a fresh supply of Whiskey to the Landlords of the City.
To avoid Redman's Taxes, blades divers swim out to the underside of the ship while it's docked and cut the ropes that lash casks of whiskey to it's keel. They then haul the to an under-tide hideaway along the boardwalk.

Human Male Rogue 3
Simon Blade's son is a minor thief. While working for his father Junior short changes the customers as often as he thinks he can. After work he works as a cutpurse, following those who brought a few too many coins for a nights drinking.
His evening work is rumoured to be at the behest of the traditional guild. His father is apparently unaware of their activity.
His father very fondly regards Junior and helping him in some way would ingratiate the PCs to Simon Blade who could recommend them to the Bankers (or the guild) for work...

The Ring Master
Human Male Rogue 3
Daryl is low level thief not only runs the ring. He is a thief and a member of the Bigany city thieves' guild. He runs the gambling on the events, always ensuring a healthy profit for himself no matter what the outcome. Daryl spends a lot of this money on showing himself a good time. He loves to drink and wench.
After a good night of ripping of gamblers he can often be found ripping off garments at The Rampant Unicorn. Daryl is a young man who is out of control and if smoothly questioned while drunk may reveal that the owner of The Blade (Simon Blade) is connected

Human Male Rogue 15
The Bigany City Chief Commissioner. Head of the Thief Takers under the command of Cayman Redman. His base of operations id in a secret underground complex in The Hustle.

Isabel of Bigany,
The Watcher Human,
Human Female Psion 8
Dressed in a gypsy outfit Isabel is usually found at a table in the Blade. It is there that she plies her trade as a Fortune Teller. She reads peoples futures and gives advice on nightmares for coin as is expected from a gypsy woman. For a few silver or gold (depending on your wealth or how much you would like to have) she will read the cards or tealeaves. Locals wonder whether she can in fact read the future or indeed even if she keeps the festivals at the temple of Áisnéis. Her brother Roderic assists her in her work. He is the one who ensures that clients' enthusiasm for the future does not affect their memory of the need to pay to find it out.
She is known as a ready source of information on the present as well as the future and has many visitors who are more interested in other people's futures than their own.
She often has dealings with groups of adventurers and may be an agent for the Seekers. While she can sometimes appear naïve and a little scattered any who have underestimated her have learned their mistake.
There is more to Isabel than meets the eye however. Isabel has the ability to Read Auras and has ESP. Her accomplice is her brother Roderic who reads lips and who discreetly signs to her any interesting conversations that require further investigation.
Isabel is a gatherer of information. She occasionally sells this information to other for a price but this is almost always serve her own ends and those of "The Seekers ", rather than simply for mere gold. Isabel is highly intelligent and manipulative and is usually underestimated by all who deal with her.

Niece to Kurgan DaCappo. Lilia is the girl who caused a war. Her mistaken rescue by the company of the Black Stag started a war. Their attempts to recompense ended it (A neighbourly black guard also showed an interest).
The girl apparently lives on family estates to the north and was visiting her Uncle for a holiday. Nothing else is known of her save that she is obviously of wealthy if not noble birth. Rumours circulate that several of Kurgan's enemies are actively searching for the girl who seems to be the only person he cares about.