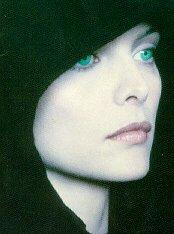 The Val-Roi of The Cycles, The Moons and The Song. Direct Respresentative of The Chosen Gods. Most Favoured of Croi. True Half-Elf Female Bard/Cleric 30 (The Cycles) The Val-Roi of The Church Of The Moons is without question the most powerful mortal on the planet. She has all the resources of The Church at her command and she communes regularly with Croi Herself. No empress or king, pauper or peasant would dare to deny her. Fortunately Glauranna leads The Church with a balanced and wise touch. Despite her immense power, she is more loved and respected than feared. On the few occasions that she has been moved to anger, she has been fearsome to behold.

The High Oghrim of Shale Cerebral Shadow Male Wizard/Cleric 30 (Shale) This quiet and thougtful man is far older than he appears. It is rumoured that his body has stopped aging because Zaccheus spends to much of his time as an incorporeal entity, guiding those of his flock to Trancedance. He rules The Church Of Shale with a very light hand, in fact the running of The Church is something he is barely involved with. Many of the clergy of Shale see him more as an oracle to be consulted on matters of great importance rather than a true leader. When it comes to matters of knowledge, particularly religious and arcane knowledge he is without peer. This is where his true value to The Church Of Shale lies. His arcane might is immense but rarely utilised, as there are few opponents who could challenge him, and because Zaccheus is subtle in nature. 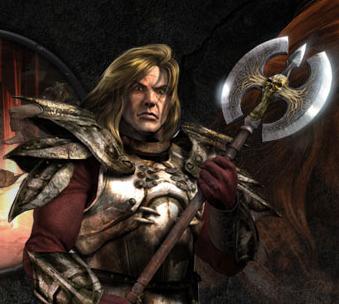 The Great Reaver of Charon
The Axe

Aelle Creed was raised in Bigany in a minor noble house of the Torc family. Since early childhood he has spent most of every day, practicing with his Charon Waraxe. He is almost always to be found in one of the Charon Temples training and practicing. He has fought every Charon priest he has ever met and defeated most of them. It is over a decade since he has been bested in combat. He claims to eagerly look forward to meeting a foe that can beat him in single combat, so that he many further improve his skills.

Before the main Charon religious festivals, The Great Reaver will go to the ‘Open Moon Temple’, a Charon arena on the roof of one of the tallest buildings in the great temple complex of Bigany city. A cloud descends over the arena so that no one may observe what happens therein. It is believed that each time this happens, Charon Himself comes to fight The Great Reaver to test his worthiness. When The Great Reaver returns from the Temple, he is always covered in axe wounds but the strength of vitality of his mortal body are renewed.

If ever a prophet revelled in his job this is the one. Usually bound to the environs of the great temple of the moons in Bigany he occasionally escapes to spread doom and gloom throughout the countryside. The problem is that he is so often right.
While other prophets completely blind themselves he refuses to do so, claiming that he sees twice as clearly with one eye. It has been suggested that he likes to see the look on peoples faces once they realise what he is telling them.

Dreamers of the order of Brionglóid
These brothers wander along the principle pilgrim routes to the shrines of Brionglóid. They seem to wander from place to place doing very little yet they are reputed to be quite powerful in the realm of dreams.

Noble Triplets who joined the Church, left Bigany for Az-Ylar and then on Towards Torland.