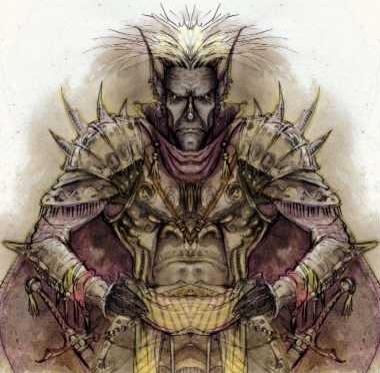 The Entity, often named as Carilith, is the son of an Abyssal Lord. This is unfortunately, mere conjecture by Kartu Torc a Draíocht Sage specializing in the Blood War.
The Seekers and The Order of Cróga have hounded the Entity for over a hundred years. He was responsible for torture, rape, murder and assassination as a minion of the Cult of Feo. Almost captured by Paul of Cróga, Turin Far seeker and Berek Blade-wrath, The entity fled The Kingdom of Bigany.
When he returned his power had been greatly increased. Working quietly in the Shadows of Bigany Carilith's return went unnoticed. Using guile, deceit along with strength and terror, the Cambion Lord built his power in Bigany. He became the leader of The Cult of Feo. Embroiled in extremely complicated and effective deceptions, he manipulated even the Seekers and the Black Guard to do his will.
It is believed by the Seekers that it was Carilith who opened the temporary portals to the Abyss and called upon the Demon hoard to Capture of King Darius XIV. The Entity plotted against the resurrection of the Dead God Misneach. Having gained Tera's Eyes, he tried to destroy these Artefacts, beneath the Seas hundreds of leagues South of Bigany. Prophecy told of a Great Cataclysm that would befall Bigany if the destruction happened. Thousands would join The Dead God in eternal slumber. But, the Company of Wolves thwarted Carilith and now the Dead God Begins to awaken...

The Dark Ruler of Nagaranthiallreth. In the north of Torland tales of the darkness to the north are whispered on cold winter nights. In the halls of the Elven Lords laments are sung of those who have died in the ravaging of Nagaranthiallreth. In all these tales there is a common villain -The Dragon known as Allialrath.
Little is known of the origins of this Dragon. She is ancient in power and cunning and was so when she descended upon the Elven kingdom in flame two in AK250. Somehow guiding her followers through the veil of dreams that surrounded the Elven realm they beset and butchered many elves before assembling for the final assault on the capital, their goal. The lord and lady of that place came forth in power to do battle at the head of their host. As the champions of both armies battled in the skies overhead the two armies clashed below. Three days later their power and strength near spent a truce was agreed. The elves came out the worst of this truce, withdrawing from their ancestral home en masse.
That was how the Dragon became lord of the north, the price, she could never take to the skies again.
Since then many have reported sightings of the dragon but nothing has been proven. For now she lies beneath her mountain fortress plotting and scheming as only dragons can.
Since then the northern limits of the empire have been heavily fortified waiting the day when the dragon strikes.
In recent times Allianrath has suffered major setbacks in her schemes. First of all an alliance of some of the greatest champions of the age drove her back into her lair.
Then, in a move that surprised even the gods, she revealed herself in full power in the city of Torland blowing her cover as Duchess Averella Torvina - one of the most senior nobles of the empire, an act which triggered direct intervention by the Chosen!
The resulting conflict levelled much of the imperial quarter of the city before she fled to yet another refuge but in a much reduced state of power...

Aboleth Ruler of the Underwater City of Etreyar
(AK508 Deposed by the forces of Bigany)
Fallen Male Aboleth Psion 10, Loremaster 2

Ko-Shaar came upon the city of Etreyar when she was only a whelp. Using her natural abilities and a great degree of cunning, she slowly and carefully gained control of the Locatha living there.
Ko-Shaar controls a vast fortune in gold, gems and slaves. But she thirsts for far more. She wants to enslave the City of Bigany, devour their knowledge (and inhabitants) and begin her conquest of the Sea.
The only things that are in her way are those damned "Skilled" humans. Amateurs! Slowly but surely she will bring them down. Already she has leeched away the once mighty knowledge of the Kinnetts. And soon they will come to her as her slaves.